Sodium is the most under recognized dietary factor contributing to leg discomfort and pain. If you are suffering from swollen or tender feet and legs this Low Sodium Fix may be the solution. Sodium doesn’t cause vein problems but certainly contributes to the problem by finding its way into the tissues surrounding your veins. This makes your legs feel heavy, not just feel heavy, they are heavy! Sodium in the tissues draws water into them, leaving your legs swollen and shoes tight.  Some people pack liters of extra fluid in each leg.

Decreasing your sodium won’t fix your vein or circulation problem but can certainly make it more manageable.  If you’re saying “I don’t add salt to my food” don’t stop reading. Most of the sodium we get in our diet doesn’t actually come from the salt shaker….

What is sodium? Sodium is the main ingredient in table salt. It is also found in a lot of foods. The body needs a very small amount of sodium to work normally, but most people eat much more sodium than their body needs.

Why should I cut down on sodium? Reducing the amount of sodium you eat can have significant health benefits:

Here are some examples of foods that often have too much sodium:

What should I do to reduce the amount of sodium in my diet? Many people think that avoiding the salt shaker and not adding salt to their food means that they are eating a low-sodium diet. This is not the case. Not adding salt at the table or when cooking will help a little. But almost all of the sodium you eat is already in the food you buy at the grocery store or at restaurants. 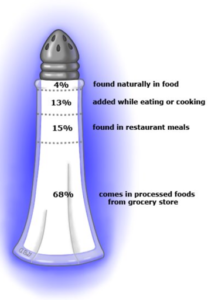 The most important thing you can do to cut down on sodium is to eat less processed food. That means that you should avoid most foods that are sold in cans, boxes, jars and bags. You should also eat in restaurants less often.

Instead of buying pre-made, processed foods, buy fresh or fresh-frozen fruits and vegetables. (Fresh-frozen foods are foods that are frozen without anything added to them.) Buy meats, fish, chicken, and turkey that are fresh instead of canned or sold at the deli counter. (Meats sold at the deli counter are high in sodium). Then try making meals from scratch at home using these low-sodium ingredients.

If you must buy canned or packaged foods, choose ones that are labeled “sodium free” or “very low sodium”. Or choose foods that have less than 400 milligrams of sodium in each serving. The amount of sodium in each serving appears on the nutrition label that is printed on canned or packaged foods. Also, whatever changes you make, make them slowly. Choose one thing to do differently, and do that for a while. If that change sticks, add another change. The important thing is to take small steps and to stick with the changes that work for you.

What if I really like to eat out? You can still eat in restaurants once in a while. But choose places that offer healthier choices. Fast-food places are almost always a bad idea. As an example, a typical meal of a hamburger and french fries from a popular fast-food chain has about 1,600 milligrams of sodium. That’s more sodium than many people should eat in a day!

When choosing what to order:

What if food just does not taste as good without sodium? Give it time, and keep in mind your goals for better health. Your taste buds can get used to having less sodium, but you have to give them a chance to adjust. Also try other flavorings, such as herbs, spices, lemon juice, and vinegar.

Lowering your sodium can have significant health benefits including helping you feel better. Make a goal to take gradual steps toward decreasing your sodium, this will help your legs feel their best. If your legs are feeling good you are more likely to be active and gain the benefits from an active lifestyle.  Remember Healthy Legs, Healthy Life!